The importance of phenolic compounds on wine quality require methods that accurately measure the tannin content.

Tannins are phenolic compounds that play an important role in the astringency perception of red wines. Tannins also are very complex molecules with different sizes and conformations. The decrease in the astringency intensity during ageing is due to different phenomena, including cleavage reactions (appearance of smaller less astringent molecules), precipitation from solution, due to insolubility situations, conformational arrangements (shape of the tannins molecule) and interactions with other components (such as anthocyanins). Precipitation based methods (BSA and MCP tannins assays) are highly suitable for routine tannin analysis. Both methods positively correlate with each other and also with the astringency intensities measured by a sensory panel. 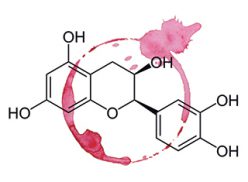 Tannins are phenolic compounds that are involved in red wine mouthfeel attributes. They are also thought to play a very important role in the astringency perception. When drinking red wine, the tannin compounds interact with the salivary proteins, creating a macromolecular complex that precipitates from solution and causes a drying and puckering mouthfeel sensation, also known as astringency.1 The intensity of this feeling depends on many factors. The size and conformation of the molecules, the combination with other wine components and the levels found in wine define the astringency intensity.

It is also known that the wine astringency decreases over the ageing process.2,3 This behaviour that was initially attributed to a decrease in the total tannin content present in the wine, is nowadays ascribed to different phenomena. Starting with the assumptions that tannins polymerise during ageing and that the ability of the tannins to elicit astringency increases with tannin size (i.e. the bigger the molecule, and the higher the number of sites available to interact with the salivary proteins, the higher the ability to combine and precipitate proteins)2 other phenomena that explains the decrease in the astringency intensity needs also to be playing role. First of all, cleavage reactions, which means large tannin molecules break down giving rise to smaller, less astringent tannins, have been proposed by some researchers.4 Moreover, molecular conformational arrangements have also been identified as a possible reason.5 Bigger and larger tannin molecules can also be too bulky (which means that due to the molecular conformation, the active binding sites are not available to interact with the salivary proteins). In this specific scenario larger tannin won’t give rise to an increased astringency perception. It is also well accepted that anthocyanins play an indirect role in wine astringency. The anthocyanin-tannin molecules cause a reduction on the ability of the newly formed polymeric pigment to interact with salivary protein thus reducing astringency (phenomenon that could also be related to the abovementioned conformation rearrangement scenario).6 The later phenomena together with the precipitation of tannins from solution, due to insolubility conditions, may explain why the wine astringency softens during ageing.

The quantification of tannins has been challenging researchers over the past years as these compounds are of a very diverse nature, a fact that makes it difficult to estimate their concentrations. However, a number of methodologies are currently available for the measurement of the wine tannin levels. A method that has been commonly used for a long time exploits the ability of the tannin molecules to break down in a heated acid environment (acid hydrolysis method).7 The individual molecules show a red coloration after the heating process and can then be measured by quantifying the intensity of the red tonality using a conventional spectrophotometer. This method that is used worldwide presents a number of limitations. It does not take into account the structure of the tannin pool and it also does not consider other components (anthocyanins) that can interfere in the reaction and measurement. Due to this, the tannin concentration in wine is often overestimated and it is common to observe an increase in the wine total tannin content during ageing. Nevertheless, the method also has some advantages as the ease of implementation and reliability.

Once understood that the astringency perception is caused by the precipitation of the salivary proteins after the interaction with the tannin molecules, the following question comes into our minds: Why not using the same principle that occurs naturally in our mouth to measure tannins? Based on this reasoning two new methods for tannin analysis were recently developed. The first one relies on the interaction of tannins with an animal protein. This method uses bovine protein and is known as the bovine serum albumin protein or BSA method.8,9 The first step of the method consists of the precipitation of the tannin compounds after interaction with the BSA protein. However, a further step is required as the protein shows similar spectral properties than the tannin compounds and cannot therefore be quantified at the maximum absorption band of the tannin molecules. The reaction of the tannin complex with ferric chloride, that gives rise to blue coloured compounds, is thus measured …

We're not around right now. But you can send us an email and we'll get back to you, asap.

How to reduce the pinking potential of white winesWine Chemistry
X